Here are three facts about the IT Industry

It might be surprising to learn that the ICT sector is larger than the agriculture industry. This is one of the findings from Stats SA’s latest Information and communication technology satellite account for South Africa report. The document covers ICT’s contribution to the gross domestic product (GDP), its role in imports and exports, and its contribution to household spending.

Larger than agriculture, but smaller than tourism

Think of the vast wheat fields of Free State, the wine farms of Western Cape, and the sugarcane fields of KwaZulu-Natal. The South African agriculture industry includes a wide range of activities, from livestock production to horticulture. In 2014, agriculture contributed just over 2,4% to economic production1.

ICT’s contribution, on the other hand, was slightly higher at 2,7%2 (or R93 billion); larger than agriculture, but slightly shy of tourism’s contribution of 3,1%3. In other words, for every R100 that the economy produced in 2014, R2,70 was due to activities related to ICT4. 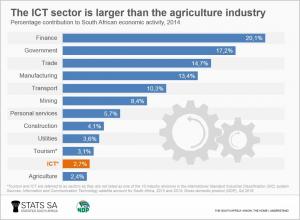 Breaking it down a little further, just over two-thirds of the R93 billion was a result of activities related to telecommunications services that include, among other things, private broadcasting and cellphone services. The remaining third consisted of computer services (e.g. data processing and software development), manufacturing of ICT equipment (such as electronic components and devices), and activities related to the development of content and media.

A country experiences a trade deficit when it imports more than it exports. South Africa has consistently imported more ICT products than it has exported. The trade deficit for ICT has grown since 2011, from R42 billion in 2011 to R97 billion in 2014. 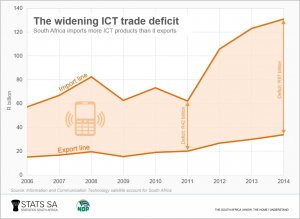 Almost half of ICT imports – 47,5%, in fact – consisted of radio, television and communication equipment, and 30,7% consisted of office and computing machinery. This highlights South Africa’s reliance on other countries to provide it with ICT equipment, such as smartphones, tablets, computers and servers. 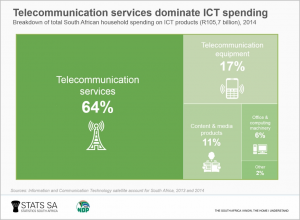 We are a recruitment and placement company that focuses on highly sought after skilled individuals with the edge to deliver value adding solutions to our clients and expand their knowledge in the IT sector.

SEND US A MAIL